About 300 acres near the corridor of the King Expressway extension has been purchased by the state to protect the area that captures and conveys water to thermal springs in Hot Springs National Park.

The Arkansas Department of Agriculture confirmed acreage its forestry division acquired from Deltic Timber east of Natural Springs subdivision was secured to protect the park’s recharge zone. A report the Federal Highway Administration approved last April said 189 acres of the more than 23,000-acre recharge area is inside the corridor for the 5-mile, two-lane extension that will connect the expressway’s Highway 70 east interchange to the junction of highways 5 and 7.

A deed filed last week showed the state paid $975,000 for the parcel that was part of the large tract of backcountry between Highway 70 east and upper Park Avenue that Deltic Timber acquired from Weyerhaeuser for more than $11 million in 2014. 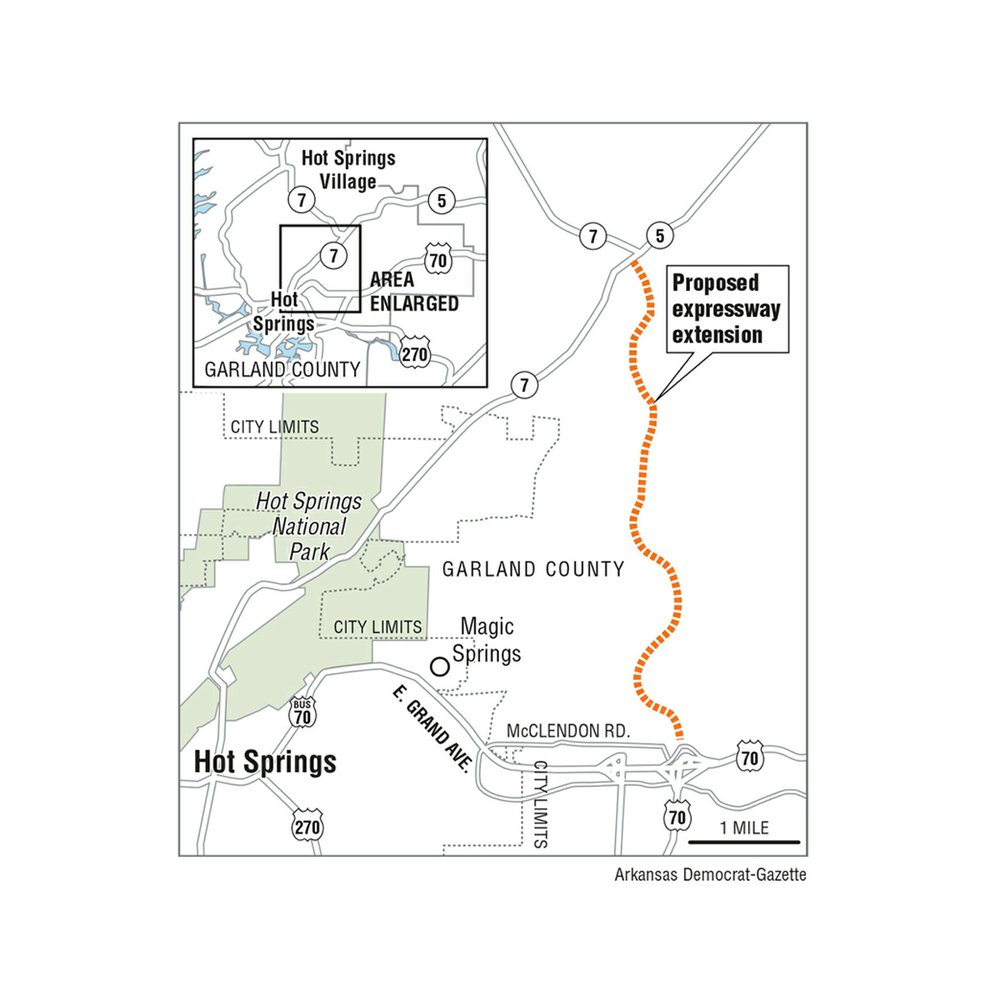 A clause included with the deed prohibits disturbance of the property other than what is required to preserve its health and sustainability. Construction of recreational or forest management roads and trails is permitted.

The FHA report, which re-evaluated a 2005 environmental assessment of a right of way corridor that tracked closely to the current path of the extension, said the Arkansas Department of Transportation would permanently protect 60 acres above the 660-foot elevation. That’s the height geologists have said is the minimum elevation from which runoff can reach the park’s thermal springs via ground fractures and faults in the recharge zone.

Runoff entering at a lower elevation doesn’t have the hydraulic force to descend to depths of 7,000 feet, where it gets heated to 170 degrees before rising to the surface. Putting drainage or impermeable surfaces at or above the 660-foot threshold blocks or diverts rainfall that would otherwise replenish the springs, geologists have said.

According to property and court records, ArDOT has condemned more than 80 acres of right of way for the extension, offering more than $1.4 million in compensation. It said last year that 62 right of way pieces are needed to thread the extension through mountain ridge gaps east of Hot Springs. The path will displace 14 households and eight businesses, ArDOT said.

Eighteen acres near Promise Land Drive were condemned in October. The private road winds around a mountain ArDOT has said will be excavated to make way for the extension. Putting a tunnel through the ridgeline offering a panorama of Hot Springs to the south and west and remote elevations to the north and east was initially considered until ArDOT determined in 2017 that excavation would be more feasible.

ArDOT selected McGeorge Contracting’s $75.15 million bid for the project in November. Garland County is contributing $30 million from the $54.6 million bond issue voters approved in a June 2016 special election. Voters authorized the levy of a countywide, 0.625% sales tax to secure the debt. Businesses began collecting the tax in July 2017 and will continue to until the debt is retired, which is expected in 2023 or earlier.

An earlier temporary 0.625% sales tax voters approved in 2011 to build the $42 million Garland County Detention Center at 3564 Albert Pike Road sunsetted at the end of 2016.

Ancient Human Civilization May Have Been Controlled by Dust