These drill hole results identify silver and gold mineralized zones in a 600 m step out from the previously released drill hole results at San Juan (Figures 1 and 2) (see News Release dated May 4, 2020). They confirm continuity of the Au-Ag mineralized system for at least 1 km, supporting a geological model where both areas, La Colorada and San Juan, are part of a single significant epithermal system with occurrence of not only Ag-Pb-Zn mineralization hosted in polymetallic hydrothermal breccias, but also Au-Ag enriched veins in high angle fault zones.

The drilling intercepts confirm prospective, near-surface, multiple vein systems peripheral to other drilled areas. This creates the potential to delineate a much larger epithermal system for future drilling and resource estimation. To date, the Company has identified six veins in the San Juan-La Colorada Area as a result of previous drill results and surface and underground mapping/sampling. The Company believes that the Au-Ag bearing structures are part of regional scale fault systems, hosting attractive low sulphidation epithermal mineralization and thus providing the opportunity to move forward confidently with further shallow drilling.

GR Silver Mining President and CEO, Marcio Fonseca, commented, “We are very pleased with the progress of our exploration program at Plomosas. We see significant strike length, down dip extensions and the presence of multiple veins, exhibiting the potential to define a large low sulphidation epithermal system covering most of the areas previously drilled. To date, we have been able to collect key geological and geometrical components for the silver-gold mineralized system at the San Juan-La Colorada Area, providing support for our upcoming drilling program. Results to date are indicating that both mineralization styles, Au-Ag epithermal veins and Ag-Pb-Zn hydrothermal breccias, are present, defining a large system with multi-kilometre strike potential“.

Figure 2: Drone Image of the San Juan–La Colorada Area (looking to the NW)

Table 1 summarizes the most significant drill assay results for this group of holes released for the San Juan-La Colorada Area.

The drill holes in this news release were generated by a drill campaign completed by First Majestic Silver Corp. (“First Majestic”) in 2018 and not previously released. They are part of an extensive surface and underground diamond core drilling database, which GR Silver Mining is consolidating and validating.

Table 2 lists the drill hole intervals previously not sampled (“NS”) for this group of released holes. The Company is investigating these holes for evidence of mineralization in the core that warrants additional sampling and assaying.

Table 3 provides collar coordinates for the drill holes presented in this news release.

The San Juan-La Colorada Area drill results continue to demonstrate the continuity of higher-grade mineralization along strike, expanding the footprint of the low sulphidation epithermal system for approximately 1km. The high grades encountered indicate both Au-Ag and Ag-Pb-Zn styles of mineralization in an area with multiple deep-rooted fault systems, creating a prospective setting for future discoveries (Photo 1). 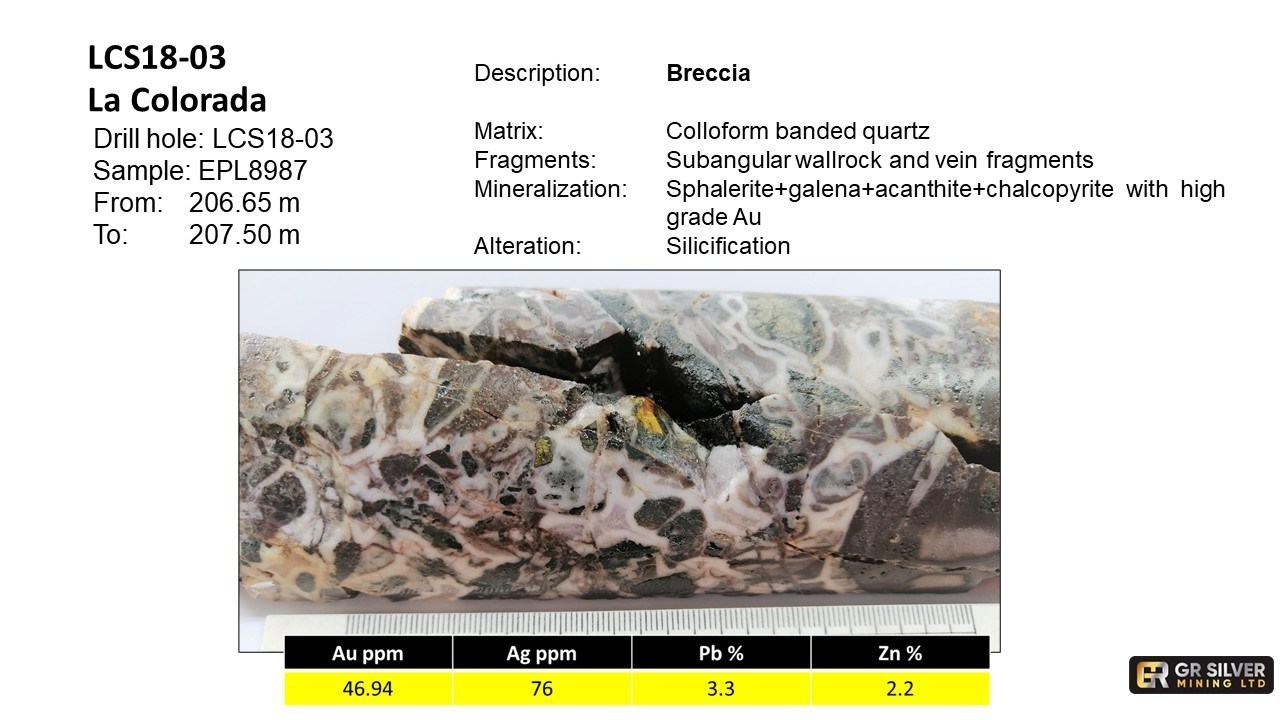 The low sulphidation epithermal Au-Ag system is hosted predominantly in high-angle faults, whereas the Ag-Pb-Zn mineralization is preferentially in shallow angle faults and polymetallic hydrothermal breccias (click here to view cross sections). Both mineralization styles have developed due to a combination of multiple deep-rooted fault structures in a multi-event system, where precious metals appear to be the younger mineralized phase. The deep-rooted regional structures transect and served as a fluid conduit for a large underlying hydrothermal system, cross cutting a volcanic sequence made of andesites, tuffs and rhyolites, where brittle fracturing in host rocks has created voids or traps for deposition of both styles of mineralization. The combination of these structures, together with favorable host rocks (permeability and porosity), have generated numerous alteration halos (argillic, propylitic, oxidation and silicification) (Figures 1 and 2). These altered areas are exploration guides for future drilling and expansion of the mineralization footprint.

The Company is implementing detailed core relogging and multi-element analysis by portable hand-held XRF (pXRF), particularly in non-sampled areas, prior to being submitted to the laboratory for detailed chemical analysis. Using pathfinder elements, the pXRF results enable data-driven determination of the mineralized and un-mineralized alteration mineral assemblages. The Company has successfully implemented a pXRF program at its nearby projects, where it has proven to be a cost- and time-effective first pass analytical method.

Previous owners completed aero- and ground geophysical surveys (magnetometry and IP) covering most of the deep-rooted regional faults. In general, for an IP survey, resistivity anomalies delineate the fault system and chargeability differentiates oxide vs. sulphide mineralization potential at depth. High resolution airborne magnetometry was undertaken by First Majestic in 2016, covering the Plomosas Project. This form of geophysical investigation is important in defining regional and local scale lithological variations, as well as potentially buried intrusive bodies that can be important heat and fluid sources in the genesis of epithermal mineralization in volcanic environments such as at Plomosas. Fluid flow derived from epithermal systems can result in the local destruction of magnetism, particularly along structural pathways, which can also be used as a targeting tool.

This geophysical ‘fingerprint’ of the mineralized system, together with the abundance of faults, has resulted in promising new prospective zones for oxide and sulphide mineralization types. GR Silver Mining continues to update the 3D geological model of exploration together with results from drill holes, bedrock mapping and soil and rock geochemistry and geophysics, generating data-driven, drill-ready targets supported by all four data sets.

The scientific and technical data contained in this News Release related to the Plomosas Project was reviewed and/or prepared under the supervision of Marcio Fonseca, P.Geo. He has approved the disclosure herein.

The recent drill holes completed by First Majestic from 2016 to 2018, followed QA/QC protocols reviewed and validated by GR Silver Mining, including insertion of blank and standard samples in all sample lots sent to First Majestic’s Laboratorio Central facilities in La Parilla, Durango, for sample preparation and assaying. Additional validation and check assays were performed by an independent laboratory at SGS de México, S.A. de C.V. facilities in Durango, Mexico. The analytical methods applied for these recent holes for Ag and Au assays comprised of Fire Assay with Atomic Absorption finish for samples above Au >10ppm and Ag >300ppm and Gravimetric Finish. Pb and Zn were analyzed using Inductively Coupled Plasma Optical Emission Spectrometry.

GR Silver Mining Ltd. is a Mexico-focused company engaged in cost-effective silver-gold resource expansion on its key assets which lie on the eastern edge of the Rosario Mining District, Sinaloa, Mexico.

GR Silver Mining owns 100% of the Plomosas Silver Project located near the historic mining village of La Rastra, within the Rosario Mining District. The Project is a past-producing asset where only one mine, the Plomosas silver-gold-lead-zinc underground mine, operated from 1986 to 2001. The Project has an 8,515-hectare property position and is strategically located within 5 km of the San Marcial Silver Project in the southeast of Sinaloa State, Mexico. The Plomosas Project comprises six areas with an average of 100 surface and underground drill holes in each area, geophysical and geochemical data covering most of the concession, and the delineation of 16 exploration/drilling targets.

The silver and gold mineralization on this Project display the alteration, textures, mineralogy and deposit geometry characteristics of a low sulphidation epithermal silver-gold-base metal vein/breccia mineralized system. Previous exploration was focused on Pb-Zn-Ag-Au polymetallic shallow mineralization, hosted in NW-SE structures in the vicinity of the Plomosas mine. The E-W portion of the mineralization and extensions for the main N-S Plomosas fault remains under-explored. The Plomosas Silver Project has more than 500 recent and historical drill holes in six areas – Plomosas Mine, San Juan, La Colorada, Yecora, San Francisco and El Saltito. These drill holes represent an extensive database allowing the Company to advance towards resource estimation and potential project development in the near future.

Plomosas and San Marcial collectively represent a geological setting resembling the multimillion-ounce San Dimas Mining District which has historically produced more than 600 Moz silver and 11 Moz gold over a period of more than 100 years.

GR Silver Mining’s other projects are situated in areas attractive for future discoveries and development in the same vicinity of Plomosas and San Marcial in the Rosario Mining District.