Federal and local researchers are teaming up to track and remove Burmese pythons across South Florida using a method shown to be increasingly effective, one not unlike sending a double-agent to infiltrate a group of criminals.

A radio-tagged, male Burmese “scout” python is released so it can do what comes naturally: finding breeding aggregations where a larger single female can mate with multiple male snakes and lays eggs. Researchers may hike to remote locations where the snakes are caught and humanely euthanized.

The Conservancy of Southwest Florida, The U.S. Geological Survey, U.S. National Park Service and The U.S. Fish and Wildlife Service have partnered to expand the reach of this practice, using radio telemetry and scout snakes to study, track and remove pythons.

“The key word here is collaboration,” said Ian Bartoszek, a wildlife biologist with the Conservancy’s Environmental Science Department and its radio telemetry python tracking project, which began in 2013. “The way I can frame it is invasive pythons know no boundaries, so why should we? We’re sharing ideas, strategies, findings, and primarily using our scout snakes to locate reproductively active females during the breeding season.” 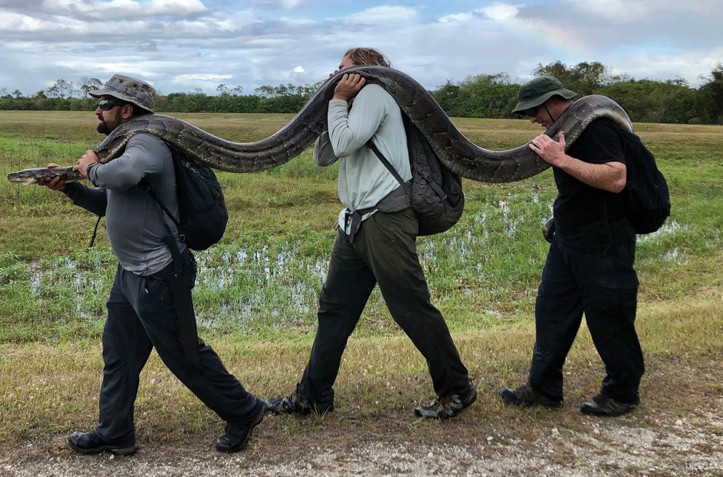 That season typically lasts from January through April and, in fact, peeks in February around Valentine’s Day.

“Working with federal partners allows us to expand our reach, better understand and ultimately remove this apex predator that’s having tremendous impact to wildlife across the Everglades,” Mr. Bartoszek said.

He adds, “Are we going to find all the pythons? No. But this is the only reliable technique that exists to date to find large breeding females away from roads and levees.”

The snakes are at the top of wildlife agencies’ Most Wanted list because they are considered an invasive species that wreak ecological havoc in South Florida with their massive appetites, prolific breeding habits and hard-to-find nests. Researchers estimate that there are tens of thousands of them living across the Greater Everglades Ecosystem, feeding on mammals, amphibians, lizards and threatened and endangered bird species. Mr. Bartoszek stressed that the snakes are generally interested in our native wildlife, not us.

During the 2019-20 breeding season, the partnership of researchers found and removed 5,000 pounds of adult pythons from remote areas across the Florida Everglades and southern Florida. That includes 86 adult pythons, 53 of which were females, as well as 2,500 developing eggs.

Individual pythons reaching 18 feet long or more have been found in Florida, though the snakes are on average 6 to 9-feet long. It is illegal to buy or sell Burmese pythons in Florida, which were released as pets in the state over the last several decades, at least.

The Conservancy of Southwest Florida began work with scout snakes back in 2013 when it launched its Burmese Python Radio-Telemetry Study.

During the past seven years, the Conservancy’s python tracking team has removed 15,500 pounds of python from just a 55-square-mile area in southern Florida.

With the partnership between agencies, the radio tracking method will be used in Big Cypress National Preserve, Crocodile Lake National Wildlife Refuge (in Key Largo) and other areas of Southwest Florida.

The Conservancy’s own team of at least a half a dozen scout snakes includes their top tracker, named Elvis, a 7-year veteran of the program.

The scout pythons will complement ongoing efforts across other federal and state agencies to track and remove pythons, often ones spotted near roads or levees. The Florida Fish and Wildlife Conservation Commission and the South Florida Water Management District announced in July that the two agencies, working together under the direction of Gov. Ron DeSantis, had removed 5,000 Burmese pythons from the Everglades.

The U.S. Geological Survey, the Department of the Interior’s research agency, has been conducting research on pythons based in Everglades National Park since 2006 and provided funding for some of the Conservancy’s initial fieldwork on pythons. One of the ways the USGS is helping now is in researching what characteristics make the best scout snakes, explained Jillian M. Josimovich, a biologist with the USGS based in Homestead.

“If certain scouts (such as, for example, really big males) are better at finding large reproductive females, then managers may be able to improve the efficiencies of their programs by knowing which characteristics to look for when selecting scout snakes to include in their programs,” he said. “One way of looking at it is that we’re trying to find out which snakes are the most likely to be sexy.”

Individual organizations have used radio-telemetry methods to locate the pythons since 2006, according to the U.S. Department of the Interior, but only intermittently in smaller, local areas.

“Our experts are committed to using innovative methods and technologies to track invasive pythons,” said U.S. Secretary of the Interior David L. Bernhardt in a press release. “This partnership will further aid in our efforts to eliminate this growing threat to South Florida’s ecosystem and biodiversity.”

Another partner agency in the python removal program, the U.S. Fish & Wildlife Service has been contending with a growing Burmese python population at Crocodile Lake National Wildlife Refuge in Key Largo since the first python was discovered there in 2007.

The snakes are a threat to the Key Largo woodrat and the Key Largo cotton mouse, two endemic and endangered species, said refuge manager Jeremy Dixon. In utilizing scout snakes in the past, the agency has found that pythons often burrowed within Key Largo’s underground substrate of ancient coral reefs, making them all the more difficult to locate.

“We’re all trying to get to the same point, which is have a better idea of how this tool (scout snakes) can be utilized,” Mr. Dixon said. “What works, what doesn’t work, any lessons learned. And partnering together can help push those ideas forward. I’ve been very impressed with all the success (the Conservancy) had there (in Southwest Florida).”

Funding for the Conservancy’s python research and removal program is provided through the Naples Zoo Conservation Fund, the Fish and Wildlife Foundation of Florida, U.S. Geological Survey and private philanthropy. ¦

» Burmese python scout snakes are valuable research animals marked with fluorescent orange tags or three-digit scale marks on its side. What you should do if you see one:

» Please do not touch or move the snake

» Please let us know the snake’s 3-digit ID number from the scale marks or base of the research ID tag, and the date, time, and GPS location of your sighting. If you can safely take a picture of the snake, please include it in your email.

» If you find a Burmese python or other high priority invasive species, aside from scout snakes, you can call to report it at FWC’s Exotic Species Hotline at 888-Ive-Got1 (483-4681).

Archie the aetosaur makes his bronze debut on campus | Community